(ThyBlackMan.com) This five dive is a harder one as we go into the top five Little Richard songs from his 1957 full length debut. One of the earliest rock legends, Little Richard came from a gospel background which led to him getting into the business primarily performing R&B. An interesting note is that Little Richard was discovered by Black rock pioneer Sister Rosetta Tharpe as he was covering her songs at a show in 1947.

We’ll start from the early albums when doing five dives so let’s look at the best Little Richard songs from Here’s Little Richard. Many Black artists who came out with albums during the 1940s and 1950s also spent a lot of their peak record producing period doing session musician work. A full length of songs from across ten years that they managed to record will get out, forgotten, and end up spawning the British Invasion in the 1960s.

With Little Richard, he did session work in the 1950s but had singles out starting in 1951. Prior to getting into the twelve, full length debut Little Richard songs, the only one I was really familiar with was “Tutti Frutti.” It was such a hit that unless you were just really into 1950s rock and blues or a Little Richard fan, the rest of album just poofs.

And that’s a shame because I dig Here’s Little Richard. The songs are short, Little Richard comes with this high energy singing style with high notes, and his playing as well as the band’s is up tempo throughout! I actually enjoy this a lot more than I did Screamin’ Jay Hawkins’ debut.

Let’s into the tunes!

B-Side: Rip It Up

If I had to pick a favorite Little Richard song from this album, it would be “Rip It Up.” It would probably be “Tutti Frutti Part III” if we were renaming tracks. The album has some exciting rippers like our previous entry but this one just really rides and makes the use out of its 2-minutes and 20-seconds. When listening and not watching the track list, it’s the right length for how fast it rides and doesn’t come off as too short or going on forever.

This song set the pace for the album, this song came with heat and energy off the bat. It’s something that isn’t unusual for rock artists from this period as bands were hungry to make something work with rock n roll. Then you notice that things are that consistent as the album goes on.

“Tutti Frutti” introduces you Little Richard if you didn’t hear his previous six years of music. It lays the template for Here’s Little Richard because the album has two paces. Most of it is up tempo and fast with his howls and yells.

The other pace is slower but much of the same. Add in that most of these songs are a little over two minutes and the longest ones are under three, the songs on Here’s Little Richard tend to blend into each other quickly if you’re not paying attention.

On its own, “Tutti Frutti” stands out purely for establishing the energy of the album and showcasing Little Richard’s own performing style and singing.

B-Side: She’s Got It

“She’s Got It” is the last track on the album—which was just 28 and a half minutes! This album ripped so fast and as I mentioned, Little Richard kept his energy and was consistent from “Tutti Frutti” until “She’s Got It.” Looking at the track list, this is probably the first time an album has had every track perfectly in place. I didn’t even bother rearranging this while going through it.

Honestly, “She’s Got It” is a simple song lyrically like “Tutti Frutti” and “Rip It Up” but his performance makes the song. Sure, it’s on the B-side but for rock at this time and considering Little Richard’s consistency on this album, he made an album with pretty much two A-sides.

This is probably the most blues-steeped song on Here’s Little Richard. Everything else is pretty much rock n roll. That doesn’t mean “Cant Believe You Wanna Leave” is out of place on the album. Remember, early rock—rock n roll—came out of blues. There isn’t that much of a gap between the two in rock’s formative years.

As a song, it’s wonderful. Little Richard is slightly subdued here but I’m putting that down to the tempo not being fast so he isn’t hitting the song with the same level of energy. That said, “Cant Believe You Wanna Leave” is one to check out.

Finding the definitive fifth Little Richard song on this album was a hard one because the tracks are pretty similar throughout but they’re all…good at the minimum. Nothing’s really fine, OK, or bad here. “Long Tall Sally”. Apparently, Richard’s uncle John is messing around with this woman Sally in this song. As you’d expect his aunt Mary isn’t having it.

That’s basically the story here, a story as old as time in blues. Again, it simple lyrically but is boosted by Little Richard’s singing and the overall energy brought to the song. Without those two ingredients, this song could’ve easily been a lost B-side track with any other artist.

Those are our five from Here’s Little Richard! What five Little Richard songs did you prefer from this album? Let us know below in the comments!

This talented writer is also a podcast host, and comic book fan who loves all things old school. One may also find him on Twitter at; metalswift. 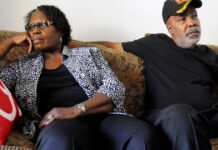