In American Blues Theater’s production of “Fences,” the play that won August Wilson his first of two Pulitzer Prizes, director Monty Cole’s intimate staging gives the audience a front-row seat to powerful performances by an excellent cast. Sitting on two sides of a long and narrow traverse stage in a theater that seats 60, viewers are not only close to the actors but also face-to-face with each other, fostering electric audience reactions. During one impassioned speech by family matriarch Rose Maxson (Shanésia Davis), several people visibly and audibly cheered her on. The casting and staging combine for an intense revival of a modern American classic.

“Fences” premiered in 1985 and marks the 1950s entry in Wilson’s famous 10-play cycle about the experiences of Black Americans in each decade of the 20th century. This epic family drama is set at the home of Troy Maxson, a former baseball star of the Negro League, now in his 50s and working as a garbage collector in Pittsburgh. In this production, Kamal Angelo Bolden brings a commanding stage presence to the complex role, which James Earl Jones originated on Broadway and Denzel Washington played in the 2016 film adaptation.

With a voice that can boom in anger, spin a captivating yarn or soothe a child, Bolden gives a nuanced performance that shows the range of Troy’s humanity. A man “born with two strikes” against him, Troy reveals details about his troubled youth — running away from an abusive father at age 14, becoming a young father himself and spending 15 years in prison after a botched robbery. Following his release, he finds success in baseball, but his career is hamstrung by the racism that kept Black players out of the Major Leagues at the time. Driven by a duty to provide for his family, Troy works just as hard hauling garbage as swinging a bat, but he finds the same inequities continue to plague him.

Rose lives in the shadow of her husband through much of the play. In this role, Davis maintains a dignified calm that makes her climactic speech in act two even more explosive. Cole’s staging emphasizes the gender dynamics of the era and of this marriage. Male characters remain on stage when they are not featured in a scene, silently engaging in the action from the sidelines. Rose’s exits take her offstage into the house, literally and figuratively isolating her from the men. However, it becomes clear that she is the family’s rock as her strength of character is further revealed.

William Anthony Sebastian Rose II plays Lyons, Troy’s adult son from a previous marriage, and Ajax Dontavius appears as Cory, the teenage son of Troy and Rose. While the two sons have different personalities and interests, both share the weight of their father’s expectations. A musician with no gainful employment, Lyons is berated by Troy when he asks to borrow money. Rose II lends to the role a charming, happy-go-lucky air, but we also see the pain caused by his father’s absence during his childhood.

Cory, still in high school and living at home, bears the brunt of the father-son strife. Although the teen is a promising football player who catches the eye of a college recruiter, Troy worries that the sports world will be no kinder to his Black son than it was to him. A conflict ensues over whether he will play football or work a part-time job, and the relationship further deteriorates as damaging family secrets emerge. The two actors give fiercely emotional performances in their shared scenes, and Dontavius is especially moving as he suffers the dual heartbreak of a father’s rejection and a crushed dream.

Rounding out the cast (that is, the adults — young Riley Wells has an adorable turn in the final scene) are Martel Manning as Troy’s longtime friend, Jim Bono, and Manny Buckley as his brother, Gabriel. Manning plays Jim as affable, kind and caring enough to hold Troy accountable when his actions are harmful. Buckley gives a sweet, poignant performance as Gabriel, who sustained a head injury in World War II and now believes he is the angel who shares his name.

Under Cole’s direction, the actors share strong chemistry and always hit the right notes in Wilson’s dialogue — alternatively humorous, poetic and searing. The complicated family relationships are foregrounded by staging that never distracts from the performances but erupts into violent physicality when called for. At the play’s heart are a flawed patriarch straining against an inequitable society and resilient family members who fight to overcome generational trauma — characters who are vividly brought to life at American Blues Theater. 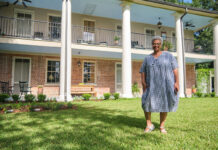 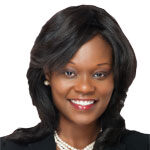 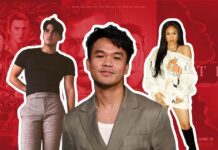 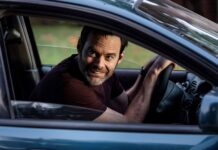