Everyone remembers their first Time-Based Art Festival (TBA). I know I do. It has punctuated significant moments in my life over the last decade that I’ve been living in the Pacific Northwest. As the autumn equinox creeps closer on the calendar, my anticipation starts to set in. For me, TBA often not only distinctly marks the beginning of the end of summer, but the start of a week-plus-long intensive experience in seeing some of the most stimulating, fun, and challenging performances in present-day contemporary art.

The TBA, unlike most festivals—or, let’s be honest, most art-focused events—has always felt refreshingly approachable. It brings together an amalgamation of contemporary performance artists, activists, musicians, dancers, and creatives in our very own city. Something about which Portlanders can certainly be proud. Not only is TBA held at one of the foremost art institutions in the city, the Portland Institute for Contemporary Art (PICA), but the event also brings a certain energy to town in its diverse exposé of progressive performance work that taps into the similarly varied arts landscape of the Pacific Northwest. The expansive overview of contemporary art that is TBA has taken place every year since 2003. Even during 2020, the festival persevered, streaming many of the would-be in-person performances online over three weeks. Taking cues from last year’s adaptive approach by going mostly virtual, TBA:21 will have events happening both online and in person. Also similar to last year, there is a strong focus on artists and activists from and around the Pacific Northwest. This year, and like years before it, PICA emphasizes highlighting and working with BIPOC artists within the local community as well as nationally and internationally.

TBA typically spans ten days—this year, it is a little longer than two weeks—in September and activates numerous venues throughout the city, from parks and theaters to galleries and public spaces. There will be more opportunities for in-person performances with COVID-19 precautions in place. All attendees will be required to provide proof of vaccination or a negative COVID-19 test. Most of these performances will be held at PICA’s still newish Northeast home, but some performances will take audience members outside and throughout the city, sometimes locations not being released until several hours before the event. Sadly, this year’s TBA won’t feature the often-characteristic-end-of-performance-decompression-nightlife that we’ve come to know and love over the years, but hopefully, next year will be another story. Regardless, I’m eager to jump on some streams and finally see some performances in person in the coming weeks! As, in years past, I expect TBA to bring a much-needed jolt of energy to the city that kicks Portland into gear right before fall. If you haven’t been yet, and especially if you are a newcomer, this year is the perfect time to check it out. Between the flexibility of the “Pay What You Can” Pass and the online streaming, there is a lot available. Even when there isn’t a performance taking place, there are so many lectures and panels that keep the festival’s momentum going from day to evening.

Here’s a look at some in-person events I’m excited about; a subsequent piece will focus on digital events. Tickets for these events are available through the purchase of a pay-what-you-can Festival pass.

After being inside for the better part of two years, reading that performance will take the audience to three different locations throughout its duration sounds very stimulating. Curated with Wa Na Wari, a center for Black art and belonging in Seattle, Mia Imani, an interdisciplinary artivist (art + activist) and arts writer, based in Berlin, Germany will perform GOOD MOURNING: RITUALS FOR DISPLACEMENT on Sunday, September 19, at noon. This one afternoon-only performance by Imani combines rituals, daydreaming, and intentional visualization with ethnography, geography, and psychoanalysis in a way to center the agency of marginalized communities and invite them to heal. Imani’s work is described as “using dreams as a portal to manifest alternative past(s), present(s), and future(s)” —investigating new ways of potential being. The location will be released in advance of the performance date, and mobility devices will be accessible to audience members.

Also presented in collaboration with Wa Na Wari is vanessa german’s THE BLUE WALK, on Friday, September 17, at 5 pm. german is known in her town of Pittsburgh for bringing people together and the Blue Walk—an event of grief, joy, love, power, and healing. Based out of Pittsburgh’s Homewood neighborhood, german is a self-taught citizen artist working across sculpture, performance, communal rituals, and immersive installation. This performance will take festival-goers outside through historically Black neighborhoods. Framing artmaking as an act of restorative justice, german’s work “confronts and begins to dismantle the emotional and spiritual weight imposed by the multi-generational oppression of African American communities.” Before the “Blue Walk” in what is so tenderly described as a “short period of togetherness pre-ritual” participants will meet at the field near Legacy Emanuel Medical Center on N. Williams Ave. and will be taught two songs that are about listening and giving permission to the voice and the body, forming the basis of the ritual of THE BLUE WALK.

INVITATION TO BEING A FUTURE BEING, Emily Johnson, Raven Chacon, Holly Mititquq Nordlum, and Drew Michael

Emily Johnson returns to TBA in Invitation to Being a Future Being, which consists of both an installation that will be on view throughout the festival and a performance that will take place on three different nights throughout the opening weekend—September 16, 17, and 18, at 7 pm at PICA. Johnson is well known for their significant and influential dance-based works and how they share the experiences of movement, place, history, and collective action within the continuance of Indigenous cultural practices. The performance intends to activate the installation by Johnson, with collaborating artists; composer Raven Chacon, visual and tattoo artist Holly Mititquq Nordlum, and artist and mask-maker Drew Michael. Together they will explore the “power of creation to build a visual, aural, and ancestral landscape of Indigenous power.” I cannot think of a better time than now to explore, investigate and reshape the way we relate to ourselves—both as “humans and more-than-human cohabitants of our world.” The installation work is on view at PICA from September 17 through October 3, 2021, open hours are Friday, Saturday, and Sunday from 12–6 pm.

Let ‘im Move You is a series of works choreographed by jumatatu m. poe (Philadelphia and Durham ) and Jermone Donte Beacham (North Carolina and Dallas) that emanate from their decade-long research into J-Sette performance—a type of performance that “originated among drill teams and majorette lines of historically Black Southern universities.” The series, which originally premiered in three Philadelphia neighborhoods in June 2016, consists of an installation and four live performance works that will bring together a group of Black dancers on sidewalks and in alleyways in historically or predominantly Black neighborhoods while drawing on J-Sette’s call-and-response structure. The location and routes for the performance will only be announced to audience members a couple of hours beforehand—which additionally “liberates performers to agitate the boundaries of propriety and belonging while confronting the historic imaginations and limitations inherent in the locations the performance takes place.” Performances will take place Friday, October 1, 2021, at 6 pm & Saturday, October 2, 2021, at 6 pm in the city’s Eliot, Boise, and Humboldt neighborhoods.

Additional performances that will take place at PICA to make note of from locally based artists are APOGEE by Emily Jones & Hannah Krafcik and AT THE END OF EMPIRE by rise x fall (rubén garcía marrufo, jaleesa johnston, maximiliano). APOGEE brings together sound, text, and other motion-based elements which both artists have gathered and arranged throughout the pandemic. This performance does have a content and photosensitivity warning for both the live and virtual performances. September 30 at 7 pm, October 1 at 7 pm, October 2 at 7 pm.AT THE END OF EMPIRE by rise x fall will have its world premiere at this year’s TBA — which exists as a live performance, large-scale three-channel video installation, and collectible video art tortas. September 23, 2021, at 7 pm, September 24 at 7 pm, September 25 at 7 pm.

Ashley Gifford is a writer, photographer, and technology professional based in Portland, Oregon. She is the Founder/Editor of Art & About—part art blog, part publication, part resource—documenting art in the Pacific Northwest since 2014. She has written for Art Practical, Journal FYI, and Oregon Arts Watch, and other publications. 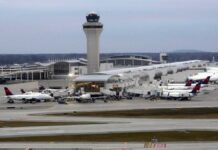 Woman arrested on flight to Detroit, accused of ‘anti-Muslim rhetoric’ and assault 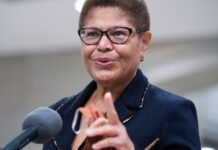 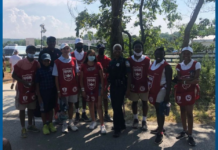 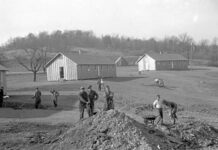