Which cable news anchors have the best style?

Like most of you, I’ve been glued to the TV for what feels like the last 10 years. The last week has marched on at an agonizingly slow pace as we watched polling turn into votes and votes turn into … whatever is going on right now. Luckily for me, I have a tried-and-true outlet to distract myself while I’m going on hour 72 (98? 193?) of watching CNN: dissecting what the men of cable news are wearing. Picture watching sports with a very invested fan; that’s essentially what watching the news is like with me. Except instead of yelling about goals or strikes or whatever goes on in sports — I truly do not know, I’m sorry — I am yelling, “That suit doesn’t fit!” and “Oh, that’s a good tie!” at the TV.  So let’s break down some of what I’ve witnessed during these trying times.

I don’t know if it’s the fact that I’m a born and bred New Englander like John or some election coverage-induced Stockholm syndrome, but somewhere between Florida being called and the late-night Trump press conference I decided that John King is … kinda hunky! With his piercing blue eyes and silver hair he certainly makes watching that magic wall for hours on end somewhat easier on the eyes. But we’ve gotta talk about his suits. His color choices? Impeccable: the rich navy he wears complements his hair beautifully and he always opts for a crisp white shirt, which as I have said about six thousand times, is always advisable. And while King is built THICC, as I believe the kids call it — and this is hot! — his suits do not accommodate his size; the seams look like they are screaming, the back vents flare out, and the whole thing is an inch to an inch and a half too short. If he sized up and went with a long instead of what appears to be a regular, it would make all the difference.

Don Lemon attends CNN Heroes at the American Museum of Natural History in 2019.

Don Lemon honestly can do no wrong when it comes to his fashion choices; he is a masterclass in unique anchor style that doesn’t feel quirky or like it’s trying too hard to stand out. Couple of style choices of note that Lemon makes. Number one: texture. Instead of opting for a flat wool or worsted jacket every night, Lemon is not afraid to rock a sharp tweed — often in a warm brown or gray hue. It makes him look like the modern version of the quintessential old-timey newscaster and it really really works. Another critical sartorial move on Lemon’s part is to play with proportions. He regularly opts for a wider or peak lapel which could look garish on the wrong person or styled the wrong way, but he almost always pairs it with a plain shirt and an understated (but still stylish and not conservative!) tie, which makes it all work.

I wish I had such gracious things to say about Lemon’s partner in crime, Chris Cuomo; like King, he’s a little on the thicker side and also a babe. (Again this might be Stockholm syndrome talking, so bear with me.) But why — why — the hell does Chris insist on wearing a black suit every … single … night? First of all, no. Second of all, a black suit is a very particular style choice. Unless you are an undertaker or a reservoir dog, it takes much skill and precision to pull off. Chris Cuomo is neither, and his choice to style it with a white shirt, black tie and white pocket square is just truly baffling. And I know this is something Lemon rags on him for, and rightly so! Cuomo is impeccably groomed and truly a hunky sweetheart, so I know he’s got it in him to pull off a better style choice.

Chris Wallace as he moderates the first presidential debate of 2020.

Chris Wallace is essentially what I picture in my mind’s eye when someone says “old white male journalist.” And that’s not a complete indictment of him! Or at least not his style, anyway. Wallace is a decent template for any older gent who wants to look conservative but not outdated; his suits generally fit on the more classic side, with a little more room in the shoulders and body than I would typically recommend, but they make sense on him. He plays it safe with his shirt and tie choices, which I commend far more than some of his colleagues who look like bloviating wanna-be Patrick Batemans if he were in politics.

Jim Acosta before the start of a briefing in the Brady Room of the White House in 2018.

My first awareness of Jim Acosta came a few years ago when my mother deemed him the “George Clooney of CNN,” and remarked that “he’s the kind of guy you like running into at the water cooler at work.” And she’s right; Acosta has a distinguished yet boyish charm that makes listening to the news about Trump just a little easier. His style choices are usually on the safe side; typical reporter garb — navy and gray suits that fit mostly OK, simple shirts and ties, etc. But something odd has been happening to Jim in the last few months: his deliciously gray hair has turned brown, save for some grey roots after what I can only surmise is an understandably misguided pandemic decision to start coloring his hair. Jim, if you’re reading this: please I beg of you, just let your hair go grey. A luscious head of grey hair is one of the most sought-after attributes a man can have! Embrace it. (Also if you are reading this I am single and my DMs are open.)

Al Sharpton’s look is a testament to knowing what looks good on you, knowing what you can pull off, and leaning as far into it as possible. Sharpton has a pretty distinctive style; he offsets his trim frame with wide lapels, bold patterns, and chunky tie knots. Not a combination the average bloke could manage to make look sleek, but Sharpton pulls it off with aplomb. This is in part thanks to his bravado; his presence carries the bold style choices so they don’t overwhelm him. It’s also thanks to impeccable — and I mean literally perfect — tailoring. The man literally looks like he’s poured into his suits and it’s truly a pleasure to watch as he delivers the news and they move effortlessly with him.

Look, Kornacki is just adorable. Is he the best-dressed guy reporting the news? No. Does he look like he picked his clothes up off the floor and got dressed? Yes. Is that because he seems to be running on less than 20 minutes of sleep? Very likely — and understandable! And you know what, all things considered, he looks pretty good. I give Kornacki credit, too, for foregoing a jacket or suit and opting instead for trousers, a shirt and tie. It reflects the mood of what’s going on with more accuracy than a bunch of anchors in suits and pressed shirts. This is not business as usual and there’s a weird comfort in turning on my TV having eaten nothing but yogurt and potato chips all day to see Kornacki frantically updating tallies in his slightly more casual attire.

Tucker Carlson in discussion at the National Review Institute’s Ideas Summit on March 29, 2019.

Finally, what list of men in cable news would be complete without roasting Tucker Carlson, er, I mean, critiquing his fashion choices. I went to prep school and Carlson looks like every dickish bro who skated through on mediocre grades and parents who contributed heavily to the annual fund. Carlson never met a printed shirt or collegiate tie he didn’t like, and I cannot explain why, but in all the times I have seen him my brain registered him as wearing a button-down collar shirt despite a cursory Google search of him indicating this not being the case. I think it’s just because he’s a button-down-collar kind of guy, the same way I can’t say for certain but I know he’s wearing some sort of plaid boxer and that he definitely has multiple jackets in his closet with gold buttons. 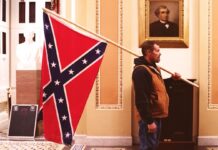 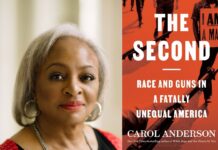 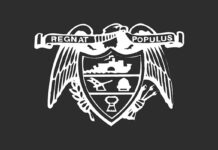 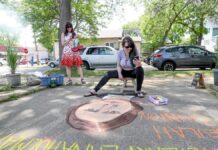 Artist Lana Holman uses her Bay View sidewalk as a canvas. Here’s what she hopes people see in her chalk portraits of notable figures. 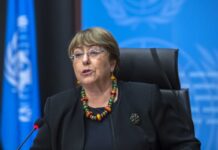