Brewer, who spent six seasons in the NFL, described his early experiences with racism and paralleled them with the accusations that President Donald Trump’s administration is racist, a claim he said is based on lies.

“My early high school experience included fighting with skinheads, and being a witness in an attempted murder trial after my friend shot a skinhead in self defense,” Brewer said. “I remember my dad’s bravery when he personally stood up against a KKK rally in my town.”

His experiences with racism, however, have “no resemblance to President Trump.”

“I’m fed up with the way he’s portrayed in the media, who refuse to acknowledge what he’s actually done for the Black community. It’s confusing the minds of our innocent children,” he continued.

Brewer explained that there’s a tendency to fixate on Trump’s tone instead of his policies, which have helped the Black community. Brewer works directly with incarcerated people as a teacher, a population he said benefited from Trump’s First Step Act. The First Step Act was a major piece of criminal justice reform legislation passed in late 2018 that aims to reduce prison recidivism rates by providing benefits to prisoners who participate in programs and expands early release for elderly individuals and non-violent offenders. (RELATED:‘The Most Anti-Life Presidential Ticket Ever’: Nun Condemns Joe Biden And Kamala Harris For Abortion Policies At RNC)

“The policies must take priority over the personalities,” Brewer said, arguing that Trump’s policies did more for the Black community than Biden and his running mate, Democratic California Sen. Kamala Harris.

“So because you have an issue with president Trump’s tone, you’re going to allow Biden and Harris to deny our underserved black and brown children school choice? Are we so offended by the President’s campaign slogan ‘Make America Great Again’ that we’re going to ignore that Joe Biden and Kamala Harris are collectively responsible for locking up countless black men for nonviolent crimes?” Brewer asked.

“Are you going to allow the media to lie to you by falsely claiming that there were very fine white supremacists in Charlottesville?” Brewer continued. “He didn’t say that, it’s a lie. And ignore the so-called Black Lives Matter organization that openly on their website called for the destruction of the nuclear family? My fellow Americans, our families need each other. We need Black fathers in the home with their wives and children. The future of our communities depends on it.” 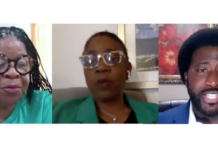 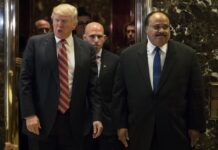